In sickness and in health

It’s not actually flu, it’s a stomach bug, but the klaxon still applies.

There is nothing, no-thing, guaranteed to turn me into Bitch Wife faster than my husband being sick. I just can’t be doing with it.

It’s not so much the illness itself – that he can’t help. No, it’s the pitiful mooning around, the calf eyes, the heavy sighs, the dragging himself around the place. Drives. Me. Insane.

To be fair, he’s not often sick. He’s a primary school teacher so over the years he’s picked up all sorts and has built up an immune system that can pretty much be seen from space.

And usually when he’s sick, he really IS sick. Like the time he picked up a bacterial infection so mysterious that the doctor had to look it up in a buke to diagnose him and then backed away slowly while writing the prescription. So that time I had more sympathy.

But then sometimes there are days where he’s a bit off form, but acts like he’s been disemboweled with a rusty spoon. Like yesterday.

It was a tummy bug, he skipped dinner and went to bed early – that should have been the end of it. But no, I had to put up with the calf eyes and the pitiful glances and the slow heavy tread as he forced himself up to bed.

He miserably wished me goodnight while I inwardly fantasised about beating him about the face with a blunt instrument and burying him under the decking.

What is wrong with me?

Seriously. He’s a great husband. A fabulous Dad. Always full of sympathy for me if I’m ill.

Yet every time he spikes a fever I’m inwardly bellowing ‘Pull yourself together, man’ while mentally planning his demise. Bitch Wife doesn’t even come close.

I reluctantly remembered that whole ‘in sickness and in health’ in the marriage vows yesterday evening, so I decided I better at least feign interest in his stomach bug. I doled out some Imodium and paracetamol with a fake smile and even took his temperature, while pressing a glass of water into his shaking hands.

“Thanks for looking after me,” he rasped, half dead in the bed. I swear, I rolled my eyes so hard I almost made myself blind. 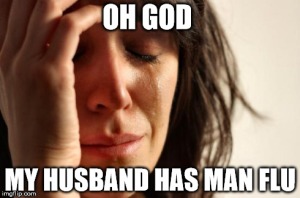 Thankfully he can’t see into my black heart, so he thinks he has a great wife, but he’ll probably cotton on soon when he catches sight of me in a mirror and realises there’s no reflection looking back.

There might be hope for me yet though – I do feel guilty for feeling like this. Not guilty enough to actually DO anything about it? But guilty none the less.

Anyway, I have to go now, Yer Man has put in an order for Tuc crackers and Lucozade to ‘rebalance my electrolytes’ so I have to get to the shops.

I also have to buy a shovel. No reason.

LIKE most brides before their wedding I’ve decided to lose a bit of weight so that I don’t have to be greased up like a hog to get into The Dress on the big day.

So far it’s going… well, it’s going straight for the fridge if the truth be told.

And because we live together, my Say No to Lard campaign also includes Yer Man. He’s resigned to it now. He can’t cook and knows that if he doesn’t eat what’s put in front of him he’ll starve. Actually starve to death. So he’s in on it too.

As a kickstart, about four months ago the pair of us gave up drinking Coke and fizzy drinks. Mainly Coke. We were mad for the Coke so we were, literally litres of the stuff we guzzled daily, barely getting up out of the leaba in the morning before we’d have an ice-cold pint inside us. We worked it out one day that we were easily drinking a two litre bottle EACH every day of the week, 14 litres a week, and that only included the Coke we drank at home, not anything we had while at work or out and about.

“28 a week between the two of us,” Yer Man got in ahead of me, showing off his superior maths skills. The big swot.

It had to go. We gave up almost cold turkey. No Coke during the week, but a can or two at the weekend was acceptable. And surprisingly we’ve stuck to it, the key was to just not buy it in the supermarket, no matter how much we wanted to, so it’s never in the house. We switched to sugar free cordial, diluted with pints of water.

That’s not to say it was easy. It wasn’t. Hand on heart, it was horrific. I had horrible withdrawal symptoms at first, a couple of weeks of them. The shakes, night sweats, numbing headaches, irritability…

“Are you putting in about the mood swings?” Yer Man interrupts, looking over my shoulder as I type.

… mood swings, restlessness, insomnia. But then it stopped. I started to sleep better, feel better, I didn’t constantly obsess about fizzy drinks. And I finally think I might be free of Coke. I still love it, I still want it, but I don’t feel the need to drink 28 litres of it every week.

So something else has to be done.

It’s time to pay real attention to our diet and to concentrate on eating proper, nutritious, whole foods. Lots more fruit and vegetables, much more fibre, piles more protein, quarter the fat, quarter the salt, less meat, you get the idea.

“I’ve been thinking,” I started confidently, ignoring Yer Man’s muffled groan from inside on the sofa “how would you feel about perhaps cutting down on red meat and turning vegetarian for two days a week? Just to see how we get on? Just to try new meals and recipes even?”

I don’t blame him for being reluctant, he doesn’t need a diet at all, he’s wonderfully fit and in shape. I’ve already taken away his beloved Coke and now I want to take away his meat? Is he the man of the house or what?

He gave in, as I knew he would, because he knows if he doesn’t do it, neither will I and he wants the best for me.

So the diet is on, full throttle.

I give us a week.