The one true ring

THERE’S a bit of a tradition these days where a woman who gives birth is a given a bit of bling from her partner after the event, a kind of thank you for going through labour. A ‘push present’ is what it’s commonly known as, particularly in the States and it’s generally a ring, sometimes an eternity ring.

Personally, if you can afford it and you want it, I’m all for it. Not the ‘push present’ part, sure I didn’t push at all, but more as an acknowledgement that Mama had a hard job to do, a long nine months and then a birth. When a baby is born, presents for the little mite pour in, but there’s rarely anything for the woman sitting in the corner shellshocked.

The woman who will never laugh or sneeze again without releasing a little bit of wee into her knickers.

Of course, your beautiful baby is a reminder that you’ve given birth and is present enough, but I’m sure the majority of women can just as easily enjoy their gorgeous babies with a rock on their fingers as they can without.

Yer Man had been all eager to get me something and we spent several Saturdays going in and out of jewellers looking for something nice, but to no avail. 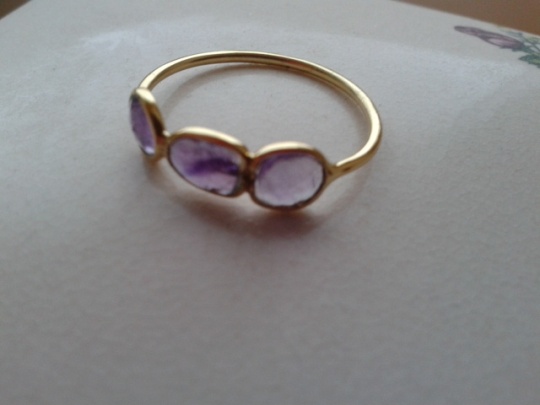 I had decided I wanted an amethyst ring – it’s a stone I’ve always loved, but is also the birthstone of February, the month in which my Dad passed away. I know that sounds very morbid, but the death of my Dad and the birth of my son are intrinsically linked for me, coming so closely together.

I was seven months pregnant when Dad died, he had been ill for the majority of my pregnancy and I had hoped he’d live to meet his grandson, but it wasn’t to be.

While that February was full of grief and mourning, there was also a sense of hope and new life as our family waited to welcome Seán into the world. As one leaves, another enters. So I wanted to honour my Dad by remembering his passing, in conjunction with remembering Seán’s entrance.

We saw a number of gorgeous rings, but they weren’t quite right. Too big. Too flashy. Too vulgar.

As we browsed I could hear my Dad in my head, the way he’d say something to be polite, but mean the exact opposite.

I had almost settled on one, but then decided against it. It just wasn’t right. I kind of forgot all about it then for a while, there’s no time limit on these things.

Then today while shopping in town, I found it.

Tiny, delicate, three exquisite little amethysts on a plain gold-plated band, so unusual, so different, so simple. I fell instantly in love with it. And I knew that my Dad, who always chose simple over showy, would love it too.

It’s from Accessorise on Grafton Street and it was only €16, something I also know my thrifty Dad would have approved of.

It’s Dad’s birthday on Monday; he would have been 72. I wish you was still here Dad so I could buy you a present, but this will have to do.

The one true ring, for Seán and for you.