Well, at least I tried

My artistic ability. Nailed it!

WHEN I was 12 and in First Year of secondary school, an art teacher looked pityingly at a still life I had drawn for homework and patted me on the shoulder with a resigned ‘Well, at least you tried.’

I was terrible at art. TERRIBLE. I couldn’t draw a straight line and to be honest, I couldn’t draw a crooked one either. I had no flair for it, no talent and only stuck at it for one year before dropping that module and doing business studies or some other such shite.

Anyway, my lack of artistic ability has never bothered me all that much, I never really needed to draw anything in my adult life, it wasn’t necessary for my career so I filed it under ‘What was I thinking?’ and left it at that.

Until I had a child.

When you have a child, everything changes. Obviously your body changes, your sleep pattern changes, your focus in life changes, at least for a little while.

But more than that, when you have a child, you’re suddenly expected to turn into this Earth Mother who can bake and sew and draw and watch endless repeats of Peppa Pig without wanting to stab yourself in the face with a rusty fork.

I can’t do any of those things. I’ve already discussed my complete inability to follow a recipe. I don’t even own a sewing needle and I have to leave the room when Peppa comes on.

And now my secret shame of being utterly diabolical at art has been highlighted.

The Beast is almost 18 months old now and has taken an interest in crayons and colouring and drawing. He goes almost blue in the face with delight when I sit him up in his high chair with a blank page and his crayons. His beloved Peppa has been displaced in his affections by Mister Maker, something he would literally watch all day if I let him.

It’s been a bit dull and rainy this week and we haven’t been able to get outside as much so in desperation yesterday I decided I’d chance my arm at a bit of autumn art. We’d stick leaves on some paper and make a bit of a collage yoke. How hard could it be? 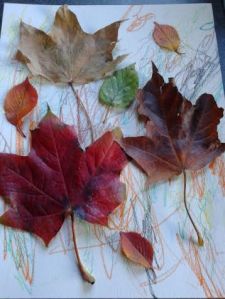 We gathered leaves in the garden before scooting back in to the warmth and breaking out the autumn colours of brown, red, orange and yellow. Seán had a ball colouring in the page before I glued on the leaves and he helped to ‘pat pat pat’ them down so they’d stick tight. And really, once we got rid of the handful of slimy, icky, wet, filthy leaves that Seán insisted on bringing into the house, it wasn’t that hard!

We made two pictures: one for Nana and one for Granny, not wanting to show favouritism. Seán is an equal opportunities grandson.

Later in the afternoon Nana arrived to take Seán off for a visit and he proudly presented her with his picture.

‘Actually, I help ….’ I tried to interrupt, before being cut off by her effusive praise.

‘All by yourself! And only 18 months old and you did this! You’re a genius,’ she said, showering him with hugs and kisses, delighted with her present and sweeping him off in the car for an afternoon of fun.

I waved them off at the door forlornly. I have the artistic ability of an 18-month-old. Still, at least I tried, right?