Keeping up with My Little Kardashian

IT appears I have given birth to a Kardashian.

Leaving the house is no longer a simple exercise, something we can achieve in a few minutes by throwing a bag of rice cakes in a pocket and closing the door.

No, now we have piles of stuff we have to bring with us. PILES of it. Allowing for every eventuality. The Beast does not travel light – eat your heart out Kim and Kanye – and at this stage I’m about one excursion away from full on curvature of the spine. 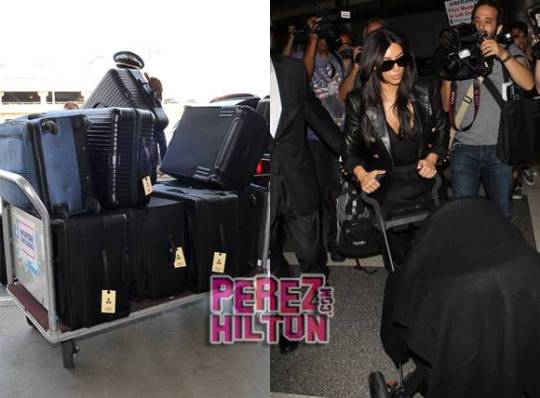 This is what it’s like packing up a toddler. Pic Credit: Perezhilton.com

We went to a Christening at the weekend, which was scheduled for around The Beast’s lunchtime, so as well as nappies and spare clothes and the like, we also had to bring food with us.

And therein lies the start of the problem. I don’t know if it’s just my kid, but he does this thing where he’ll survive for a fortnight on air and the dirt on the wheels of the buggy, but the minute we go anywhere he develops a ferocious hunger that cannot be sated.

So we need to bring food. Piles and piles of food. Snacks for before lunch, lunch itself and then leftover snacks for after lunch. And then an extra lunchbox of food, just in case.

On Sunday I packed up a lunchbox with cheese and cold meats, crackers and fruit, rice cakes and breadsticks. And then a separate bag of rice cakes and cereal hoops to keep him occupied in the church. And yet another separate bag of snacks for that post lunch peckishness eventuality. We were bent double under the weight of food we had with us. Every pocket of my bag, every pocket of my clothes, of Yer Man’s clothes, every side pocket of the car was filled to the brim with food. And he ate every single bit of it. There wasn’t a crumb left. And in the car on the way home he started asking for his dinner.

This particular weekend, The Beast was also going to stay with his grandparents after the Christening so we had to pack an overnight bag for him – along with his favourite toys – as well as a day bag. That bag contained spare clothes, his sleeping bag, his jammies, spare soothers, the first aid bag with Calpol (for use only in an emergency you understand, he doesn’t smack his lips when he sees it coming) and a pile of his toys.

The Beast is a funny little fella – he never formed an attachment to one particular toy or lovey that he has to have at all times. That’d be too easy. No, he formed a deep and passionate attachment to ALL of his toys. Every single one of them. ‘My fellas’ he calls them. His Buzz Lightyear and Woody toys. His Thomas the Tank Engine set of trains. His Boots and Dora. His Peppa Pig. His books. His diggers. His fellas. And he travels nowhere without all of them.

So we had to lug Buzz and Woody, his trains and his soft toys in the boot of the car, several other toys in another plastic bag and then his diggers, trains, books, stickers and crayons in my handbag. Just in case he needed them. We thought we might get away with telling him that some of the toys were in the car, and then sneakily leave them at home. But he’s wide to us at this stage – he insisted on inspecting the boot before we left.

“My fellas,” he said approvingly, patting my face in a benevolent fashion. “Good Mama.” I felt like I had dodged a bullet.

Finally packed up – including his buggy, coat, hat and scarf – we trundled off to the Christening, the car scraping the ground, so overloaded was it by The Beast’s essentials. 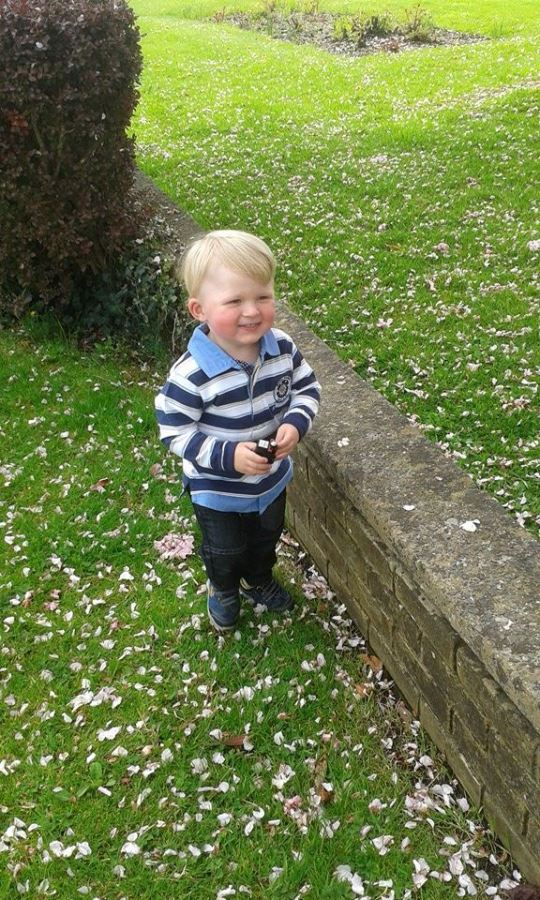 It was worth it in the end though – the snacks kept him quiet in the church while the important stuff was going on, the lunch kept him going while we got our own bite to eat, the toys amused him while we chatted with family members and he was so tired after all of it that he conked out on the way home. So in the end it was worth the four solid hours I put in packing it all up.

It’s hard work being a dictator.

There are two ways this could go in the future – we could pare it right back and insist that one lunchbox, one toy and one nappy is more than enough for one small boy. Or we could upgrade our car.

On a separate note, last week I set up a Facebook Page for Beating Myself Into a Dress and have been overwhelmed with the reaction so far.  So thank you to any of you who have ‘Liked’ the page, I really appreciate it. If any of you would like to follow me on FB, there’s a little ‘Follow’ box up on the right hand side of this page.