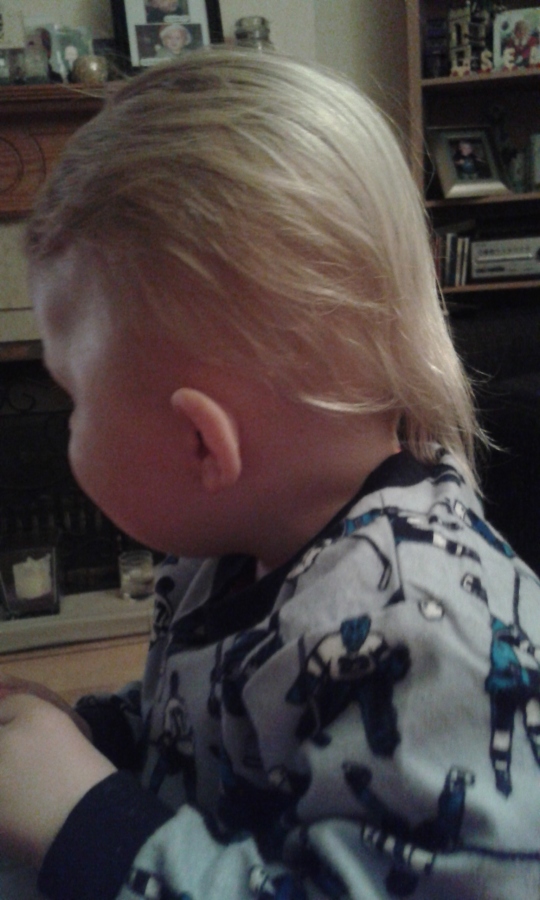 THE Beast is going through a bit of a phase at the moment where he freaks out meeting new people and has a meltdown if he even thinks that I might be considering leaving the room.

It’s been going on for a while actually. A good long phase.

He’s not so bad with people he knows, he’s fine going to his Nana’s house and playing with Granny in the sitting room – but if the girl in Tesco has the audacity to look in his general direction he loses the plot. Earsplittingly.

So when Yer Man and I realised last week that he was half blind because his fringe was in his eyes, we looked at each other and as one said: “I’m fucked if I’m bringing him to the hairdresser”.

So we did what any responsible parents would do – we Googled ‘how to cut a baby’s hair’ and did it ourselves one night at bathtime.

We even – and I’m actually ashamed to admit this? – uttered the immortal words “Sure how hard could it be?”

We weren’t going for a full on cut or style or anything, we literally just wanted to snip the scraggly ends of his fringe out of his eyes and get rid of the mullet at the back.

Disregarding all advice to the contrary, I grabbed my embroidery scissors (I KNOW) spritzed his hair and got to work.

Sweat beading my upper lip, I instructed Yer Man to be on hand with a variety of toys and songs to distract The Beast and I made the first cut.

I took off more than I had intended.

No matter, no matter, he has loads of hair, I reasoned, so it’ll be a bit shorter. So what.

All the instructions on Google said NOT to cut in a straight line across his forehead or else you’ll get a ‘pudding bowl’ effect. You’re supposed to ‘feather’ it instead.

I went for the pudding bowl effect.

Well, YOU try ‘feathering’ the hair of a 12kg squealing octopus and get back to me.

So anyway, I thought I might as well be hung for a sheep as a lamb, so I continued snipping and, well, it doesn’t look … I mean … well … 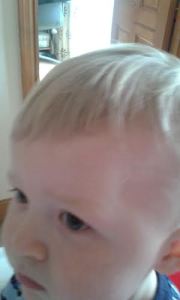 I hear the Monk look is all the rage these days.

The Beast is DELIGHTED with his new look

It’s out of his eyes in anyway.

Yer Man looked at me aghast, gulping, trying to find the right words.

There were no right words.

At the time we made the best of it and actually, fresh from the bath with his hair slightly damp and brushed to one side, it didn’t look that bad at first.

But as the days have gone on we’ve had to admit it:

The Beast looks like a cross between a convict and a Franciscan monk. It’s lopsided, scraggly, and utterly utterly hilarious.

Nana and Gaga arrived in on Sunday morning to take him off for the day and suppressed their laughter admirably.

Posted by beatingmyselfintoadress in Uncategorized Tags: baby, haircut, it'll grow, made a bollox of it, monk, mullet, parenting