What time is it Mister Wolf? 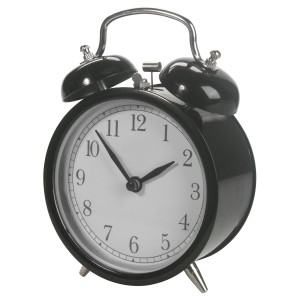 MOST people set an alarm to get themselves up in the morning – in this house we’re starting a new experiment this week where we’re setting an alarm to remind ourselves to go to bed.

We’re a disaster when it comes to going to sleep, gobshites, the pair of us.

I can’t even blame The Beast – for whatever reason the Gods of Sleep smiled upon us and he’s a good sleeper, goes down handy enough for the night and sleeps through. So it’s not him keeping me awake or depriving me of my precious zzz-eds.

It’s me. And Yer Man. And Infomercials.

While The Beast is a good sleeper, he’s doesn’t go down until late (around 9pm/9.30pm) though he sleeps then until 8.30am the next morning. But by the time we get him down, half the night is gone and really, we should be packing up for bed ourselves.

But we don’t. After he goes up we take a bit of ‘me time’ – I’ll do a bit of blogging and social media, Yer Man will play a bit of Championship Manager and then before we know it, it’s nearly midnight and we haven’t said a word to each other all night.

So we’ll plop onto the sofa for a chat and end up staying up even later, flicking through the channels trying to find something to watch even for half an hour.

It’s become a bit of an obsession at this stage. I’m actually getting a bit afraid at how much we enjoy them and naturally, the shite-er the product, the more we like them.

There’s nothing we like more than slagging the arse off a product, mocking anyone who’d even consider buying one.

Yer Man’s current object of scorn is the Nutribullet – you can’t turn on the telly after midnight without seeing an ad for this magic blender yoke that claims to make vegetable water taste nice.

“What’s he putting in there now? Beetroot? With cabbage? Ah for fuck’s sake that’s vile,” he’ll gasp, eyes bulging, glued to the telly. “That’s a pile o’ piss so it is.”

And I’ll have to agree and repeat “pile o’ piss” soothingly until he shuts up. (Though actually, secretly, I wouldn’t mind a Nutribullet.)

Another favourite is the garden hose that starts off really small but expands as you fill it. Phallic-tastic!

And don’t start me on the mineral make up that covers birthmarks and turns ordinary women into supermodels, I have to get me some of THAT. Or the steam mop that cleans everything from your oven hob to your floors to your fanny (not really). I’m obsessed with it. Obsessed.

We’ll reluctantly head to bed then in the wee hours aghast at how, yet again, we’ve let the time run away from us. It wasn’t so bad in the summer as Yer Man was off but now that it’s term time again, and he’s back to working his three jobs, something has to change.

So from tonight we’re pulling The Beast’s bedtime back slightly (even just 15 minutes) and I’m setting a first alarm for 11pm to remind us it’s time to turn off the laptops and actually have a chat and watch some TV on the couch; then a second alarm for 40 minutes later to tell us to go to bed.

The aim is to be in bed asleep by midnight every night during the week. That might sound really late to some of you but for us it’ll afford Yer Man 7.5 hours sleep and me 8.5 hours every night and hopefully we’ll see some positive benefits.

Operation Put Down The Infomercials And Go The Fuck To Sleep (OPDTIAGTFTS) begins tonight. We’ll see how long it lasts.