The Bike, the Bed, the Fairy and His Soother

I REFER to him as The Beast here and I’m sure some of you must be imagining a great hulking Conor McGregor type – but the reality is my little man has always been a small wee chap.

Even when he was in the womb he was teeny – at one stage during a scan the sonographer said ‘Stand up, you’ to my husband while making measurements on the screen. Running her practised eye over Yer Man – who in fairness is on the shorter side – she nodded knowingly and laughed when we said we had an idea our baba wouldn’t ever be a supermodel.

When he was born he was an average 7lb and a half an ounce. Not small by any means, but the 0-3 month babygros we’d bought were swimming on him. Nana came to the rescue with some teeny Newborn sized ones which fitted perfectly and fitted for ages. Well meaning visitors brought clothes aged 6-9 months saying that their own kids were wearing six month old clothes by time they were eight weeks. Not so for us, those clothes didn’t go near him for months and months and months.

He stayed in his Moses basket for months, was in the bassinet part of his pram for ages too. And stayed in his high chair for years as well, he just fit fine and was happy to stay there.

When we did eventually move him up a size in clothes or into the buggy setting of the pram and into his cot from his Moses basket I was always struck at how tiny he seemed in the new setting. So used to seeing him nestled in the close confines of the Moses basket, for example, I thought he looked miniscule in the vast cot.

Until recently. Until he stopped looking tiny in new settings and started looking just normal. Just as you’d expect a boy to look. I had started to accept that he was growing up – he had moved out of his cot to a junior bed and started preschool after all and I knew my baby was growing up. But he was still my tiny wee chap, I hadn’t noticed the physical differences.

And now it’s all I can see.

It started in April, when he got a bike from his grandparents for his birthday. I couldn’t wait to see him on it. I thought he’d look so cute and tiny. Only he didn’t. He looked like a preschooler. If anything a bit too big for the bike.

We had to adjust the saddle and the handlebars, all the way up.

Then we went on holidays and visited some playgrounds and pet farms that we had gone to last year. And The Beast was able to use all the playground equipment with ease. He was tall enough to climb things, reach things, he didn’t need any help at all.

Clothes bought a few months ago are too small now, his feet are growing at an alarming rate (I’m keeping bloody Clarks in business), very shortly we’ll be getting him a new car seat.

And then last weekend we moved him from his junior bed into a regular adult single bed. He was excited, he had new PJs and brand new Transformer sheets, as well as Batman posters on the walls. 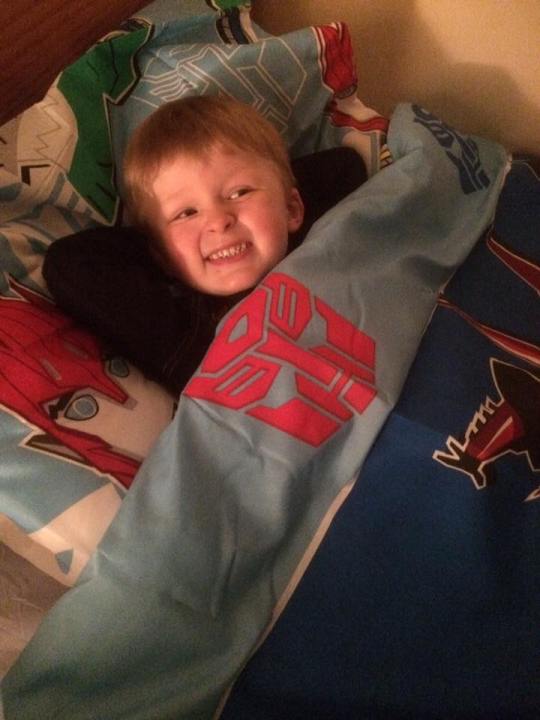 He fit. He fit in the big bed. Ok, he’s not filling the bed by any means, but it doesn’t look ridiculously enormous. He’s not my baby in a huge bed. He’s just my boy in his comfy bed.

And last night, almost the last vestige of babyhood disappeared when he left his soothers for the Fairies to take away. His comfort and his joy and his lifelong love, easily left by his Fairy Door. It was his decision, he said big boys in big beds don’t need soo-soos anymore and he’d rather have a present that the Fairies would leave instead.

So the exchange was made. My big brave boy went to sleep, and stayed asleep and that was that. The end of an era.

My tiny man is gone. My little scrap is no more. Some bastardin’ fairies are flying around with his soo-soos in their mouths.

And I’m sobbing over newborn pics.