I HAVE a confession to make.

There’s been a bit of a coconut revival going on over the past few years (well, so it appeared to me) with people frying their food in coconut oil, drinking coconut water, cooking with coconut milk and I’ve eschewed all of it, so great is my hatred for coconut.

I think it dates back to when I was a kid and they used to put a Bounty bar in the Christmas selection box – I always hated them, so much so that I used to just give them to my siblings, rather than even swapping them for something else. I couldn’t bear to even have the bar in my hand.

Gritty, bitty, overly sweet Styrofoam, that’s what it tasted like to me and I vowed never ever to have anything to do with it. and for the past 30 years I’ve survived very well doing just that.

Fast forward to yesterday when I was clicking around the Internet Googling ‘chocolate’ (shut your face, you do it too) and came across this recipe for three ingredient chocolate mousse. Containing coconut milk. Ruh-roh!

The pictures looked absolutely delicious, the author described the mousse in mouth-watering detail and I just kept imagining sinking my spoon into a glass of thick creamy chocolatey goodness.

I could. not. stop. thinking. about it so I eventually caved and went to the supermarket and bought the ingredients and decided to make the damn mousse, coconut be damned. I was sure it’d be manky, but I threw caution to the winds and got out my mixing bowl.

The original recipe includes extra dark chocolate shavings but I decided to just keep it plain for the first go and I also made a smaller amount too, just in case I didn’t like it. The original author has all of the nutritional info on calories, carbs etc plus some truly amazing photographs so do check that out, you’ll be licking the screen  So here’s how I got on:

One 400ml can of full fat coconut milk. I used Amoy.

One heaped tablespoon of icing sugar. (You can also use a sweetener if you prefer, I just can’t get on with sweeteners so went for the full sugar)

One tablespoon of unsweetened plain cocoa powder. I used Bourneville.

What you have to do:

The day before you want to eat the dessert, put the can of coconut milk into the fridge and leave it overnight.

The next day then, don’t shake the can, just open it and scoop out the solidified coconut cream from the top and discard the water at the bottom.

Whisk the coconut cream with the icing sugar until it’s nice and creamy.

Add in the cocoa powder and the salt (if you’ve decided to use it) and then whisk it again for another minute to bring it all together.

It’s pretty much ready to eat there and then but if you prefer stick it in the fridge for a while to firm up a bit more and enjoy! 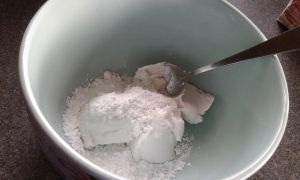 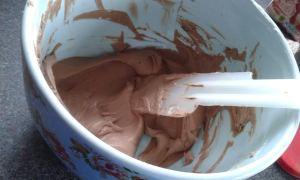 So, with my coconut aversion, what does it taste like?

Like an angel has landed on your tongue and sprinkled angel dust on your tastebuds.

It has a faint aftertaste of coconut but it’s really very slight and it actually adds to the sweetness. It’s not at all gritty and didn’t remind me of Bounty bars at all, I think I might be cured! 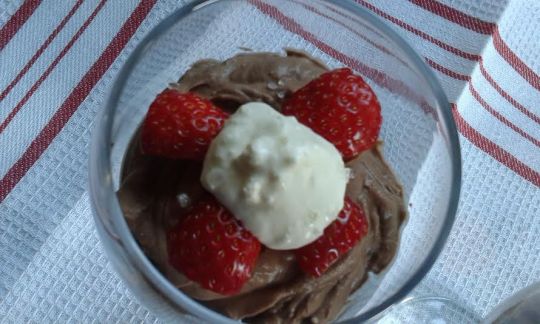 So there you have it! Three ingredient chocolate mousse – quick, easy, delicious. Give it a try, you won’t regret it.