Ingredients at the ready

SO I was mooching around the Internet this morning when I came across THIS post by Sera at The Agoraphoic Fashionista (read her, she’s fabulous) promising a cookie/cake hybrid in 40 seconds in the microwave.

Instantly my fat little piggy soul went into overdrive and I knew I’d have to try it. Cake, in the microwave? All made in the one little ramekin with no endless weighing and measuring?

I had heard of the whole cake in a mug phenomenon a few years back but that had ingredients like cocoa powder and stuff in it that you might not ordinarily have in your kitchen. This though had only four ingredients, perhaps I could do it. I hesitated though. I don’t have a great track record when it comes to make and do. After all, I once went to make THIS

… and ended up making THIS. 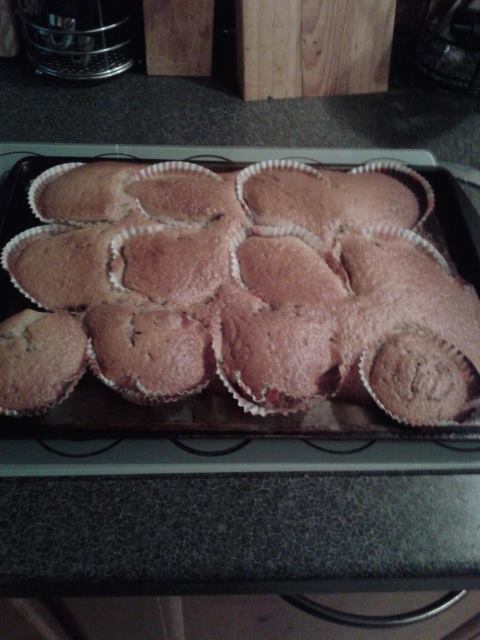 I tried to do arts and crafts with The Beast one day and tried to create THIS:

and ended up creating THIS. 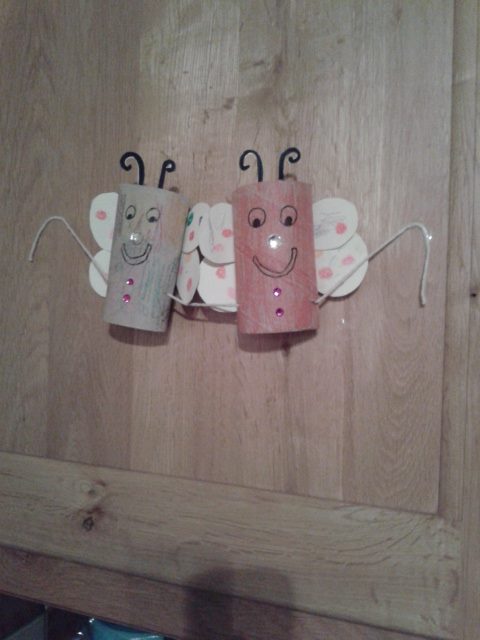 I wasn’t holding out much hope. Determined to satisfy my lust however I gathered all the ingredients together (all the details are on Sera’s blog) and nervously started.

So far so good, I got the butter and sugar in, then separated the egg – ooops! kind of! – and then put in the flour (wrecking the place in the process) and mixed it all up.

The recipe said to add chocolate sprinkles but I didn’t have any so I stuck in some of The Beast’s chocolate buttons, left over from Easter. WHAT? He was napping, he’d never know!

Shaking, almost tasting the buttery sugary goodness, I stuck it in the microwave for the requisite 40 seconds and then slowly opened the door.

Ah. Yes. It had exploded. 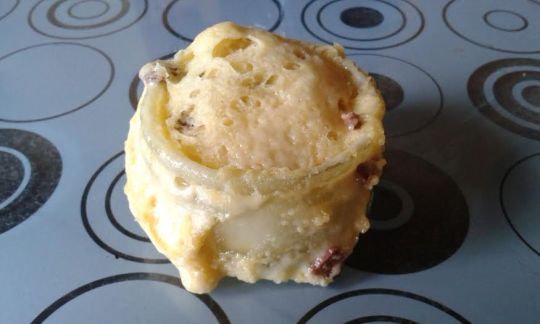 I don’t think I QUITE separated that egg correctly plus I think my ramekin was a bit too small so there was a bit of a disaster on the whole ‘coating the inside of the microwave’ front. But no matter, no matter, what did it TASTE like?

Well, what does this face say to you?

Dear God in His Heaven it was good. Gooooooooooooood! Handcuff me to the headboard gooooooooood. 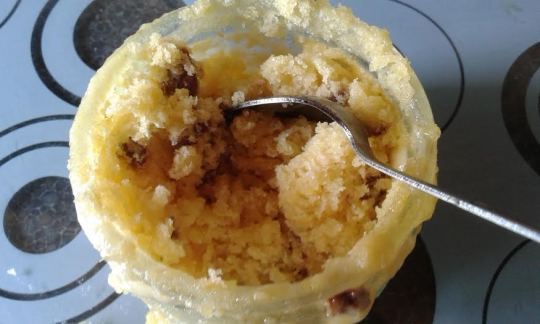 It was cakey and buttery and sweet and warm. If I had to criticise I’d say it was quite a bit too sweet and you’d deffo need a bigger flatter ramekin to get that ‘cookie’ effect but this definitely has potential. You could even add in some stewed fruit, dark chocolate, dare I suggest it even some peanut butter?

All in all a good experiment and one I’d try again. Right now in fact.

Ps: The nose? Yeah, that’s from where I punched myself in the face putting my seatbelt on in the car last weekend. Maimed so I am.

I lusted after creations like these when I was a kid

WHEN I was a kid I never had a birthday cake. Not because I grew up in some grim orphanage or had horrible parents but because I had the misfortune of being born just after Christmas.

After the excess of the festive season the last thing anyone wanted – or more importantly, could afford – was more cake.

So every January my mother would slap some Royal Icing on a leftover manky Oxford Lunch and present it to me with a fixed smile, telling me just to be glad there was a cake at all. It became a running joke in our family and in fact when I got married, my Mam iced an Oxford Lunch for me for my hen night for the craic and we all fell about the place laughing.

The cake Mam iced for me for my Hen night

It was no laughing matter in 1991 however, when I threatened to run away from home unless they got me an actual birthday cake from an actual bakery with my actual name on it. I was deadly serious and luckily the folks realised I was a woman on the edge and made with the cake. It was such a novelty in our house that they even took a photo of me with the cake. That’s me there below, wearing, inexplicably a jumper more suited to the cast of the Fresh Prince of Bel Air.

Proudly showing off my cake

Anyway, I always swore that if I ever had a kid, I’d make sure he or she always had a brilliant birthday cake – in fact I’d make it myself so I would. I made a promise to my future child that day that their birthday cakes would be creations of wonder, lovingly prepared by their doting mother. No manky Oxford Lunches for them, no Sir! 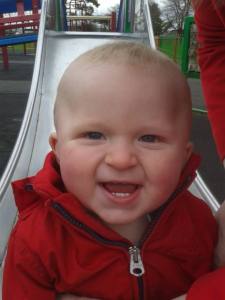 Fastforward 20-odd years and it’s about ten days until Seán’s first birthday and the panic has set in. You see, I can’t bake. No really, I’m useless. I’m not a bad cook now, but I don’t have the light touch you need to make cakes.

I’m dreadful at following recipes, preferring to fling in handfuls of stuff instead of weighing out the ingredients needed. I can’t knead, I don’t own an electric hand whisk and I don’t even know the difference between bread soda and bicarbonate of soda.

I attempted to make fairy cakes a while back and this happened:

Then I attempted to make a sugar free apple cake and it turned into this wet, stodgy, tasteless mess:

And don’t even talk to me about the time I attempted pretzels and took these oversized misshapen penises out of the oven: 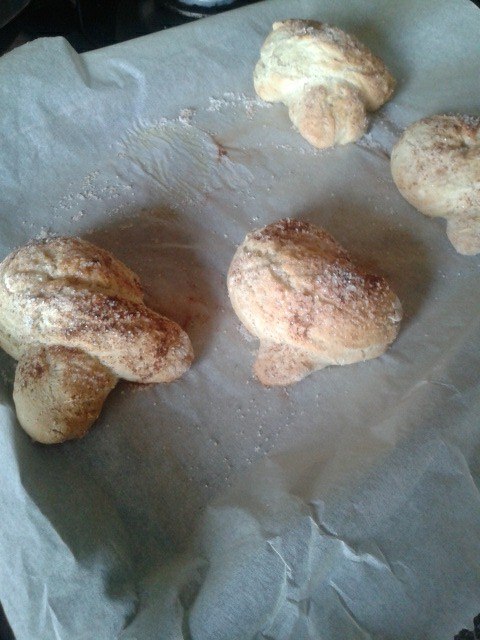 I’m not so bad at bread now, I made a tomato loaf once and it was good. But I can’t serve this at a one-year-old’s birthday party, can I? 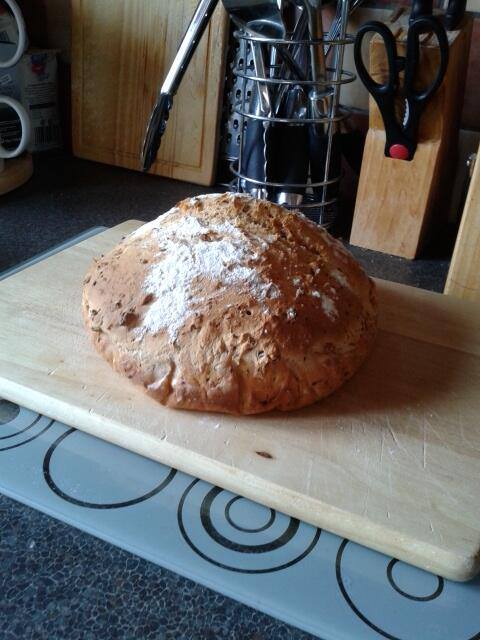 Stick a candle on it, be grand

I feel like such a failure but I know what I have to do. I’ll be letting down my 13-year-old self but it has to be done – now, someone pass me the Royal Icing. 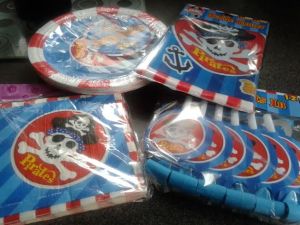 SEÁN’S having a pirate theme for his upcoming first birthday party.

It was either cut price Paddy’s Day paraphernalia or paper plates and cups saying ‘On Your Communion Day’ or the pirates. So I plumped for pirates.

‘Pirates?’ Mammy Dunne – who was with me – said, doubtfully.

‘Yes, pirates. We’re having pirates,’ I said tightly, shooting her my patented Don’t Even Think About It look.

Arriving home, I produced the bag with a flourish to Yer Man. ‘Look, Seán’s having a pirate themed birthday party,’ I said brightly.

‘Yes, pirates. We’re having pirates,’ I said tightly, shooting him my patented ‘Not In Front Of The Ma’ look.

Other mothers wouldn’t have panic bought the first thing they saw, they would have looked elsewhere for something more suitable for their still-tiny innocent baby’s birthday party. Cups and plates and banners covered in animals or balloons or rainbows.

Better mothers. Sensible mothers. Good mothers. Like my sister-in-law for example who offered me table covers and banners and balloons in both a Mickey Mouse theme and a Toy Story theme.

‘I have them all in the party drawer,’ sez she, like it’s no big deal.

She has a PARTY DRAWER. A drawer full of party stuff – SUITABLE party stuff – that she can pull out at the drop of a hat, effortlessly decorating a room in a flash. 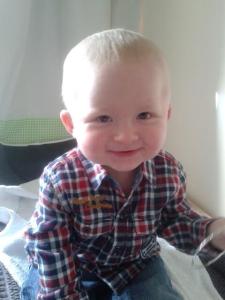 The blood thirsty mercenary himself!

This pirate business isn’t the only thing I fall down on. I’ve outsourced the food as well. We’re having a tea party in the afternoon of his birthday, just for family, for an hour. I’m serving sandwiches and tea. With some jellies and goodies for the other kids there, Seán’s cousins.

The more I thought about it, the more I panicked about the food. It’s only sandwiches, but when was I going to get to make them? I had, after all, to clean this bastion of filth [our house] before letting anyone in here and that was going to take days. Weeks even.

Eventually, after being awake all night, tossing and turning, Googling ‘Can you freeze a cheese sandwich’ I threw myself through the door of the local cafe and begged the lovely man behind the counter to help me. Covered in shame I was. Covered.

No problem, he soothed, like it wasn’t the laziest thing he’d ever heard in his life. One platter of sandwiches and some scones with butter and jam as well, how’s that?

I could have kissed him.

In my pirate buying frenzy, I also picked up some pirate ‘Loot Bags’ which you’re supposed to fill with treats to give to the kids attending the party to bring home with them.

I looked at them with horror. How had I let that happen? I had no intention of doing party bags. None. But now they were there, looking at me. Taunting me, even.

‘Fuck it,’ I exploded, when I could take it no longer ‘I’ll do poxy party bags.’

I know most people fill the bags with jellies and sweets and little trinkets from the pound shop. Bubbles and dinky cars and pretend jewellery and what not. Yeah, I can’t be arsed with any of that. I’m filling mine with Lidl buns and a two euro coin. They can buy their own plastic tat themselves.

So the date is set, the theme, food and party bags are sorted. All that’s left is the cake. Now that’s a story for another day.