The second of an occasional feature here on the blog where I review local restaurants. This time it’s The Pigs Tale in Gorey, County Wexford.

WE spent a few days in Wexford last week, a last hurrah before the start of the new term. We lured the grandparents down for a couple of days to spend some time with their grandson and they offered to take him for an evening so we could have a meal out.

They had barely made the offer when we thrust the child at them and skipped out the door, screeching away from the house at 100km an hour, lest they changed their minds.

It was a dull, cold rainy evening just before 7pm so as we stood shivering on the Main Street in Gorey we made a snap decision to go in to the first restaurant we saw, which happened to be The Pigs Tale.

“We’ll go in here,” said Yer Man pointing to the menu outside “it looks fancy, look, everything has an adjective.”

And he was right, there was lots of wilted, buttered, seared, crispy and thick going on and it all sounded delicious so up we went.

The restaurant is up a flight of stairs on the first floor, opening on to a large bright spacious room. After the chill of the evening it was warm and welcoming.

We were seated immediately despite not having a booking by a friendly (adjective alert) waiter. He almost gave us a heart attack though when he pulled up a spare chair to our table – we thought he was going to sit down with us in an ‘I’m your buddy, I’m your pal’ kind of way, but the crisis was averted when he put a blackboard containing the day’s specials on the chair instead.

The blackboard. Not the waiter, thankfully.

Phew. There really is nothing I detest more than waiters who sit down with you at the table to take the order. Get away from me with your over familiarity!

He also gave us the a la carte menu and the Early Bird menu which we were just in time for. At €25.50 for three courses, we went for that.

I decided to have the chicken liver pate, while Yer Man went for the bruschetta to start. We both wanted the pork belly for main course and couldn’t wait to try it. The Pigs Tale rear their own free range pigs and make their own black pudding so we were in for a treat.

I also decided to have a glass of the home made blackberry-ade which arrived promptly served over ice and was tart and fruity and delicious. 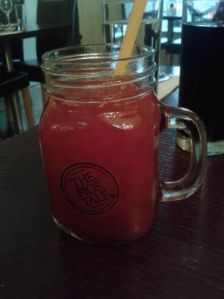 Our starters arrived after a short wait, served on long slates. Sorry, I’m going to have to deduct points for that.

Ah lads. What’s wrong with plates? You remember plates, right? They have an edge on them where you can rest your knife and fork between mouthfuls. Unlike slates which are flush with the table so you’re pretty much putting your dirty cutlery directly onto the tablecloth.

Hipster slates notwithstanding, the starters were truly delicious. My generous portion of pate was soft and smooth and flavoursome accompanied by a chutney and beautifully dressed mixed leaves on homemade spelt bread. I could have eaten it all evening. I didn’t just eat it, I gorged myself, barely stopping for breath, moaning with pleasure. In fact, I’m almost sure the person at the next table said ‘I’ll have what she’s having.’

Yer Man’s bruschetta was fresh and light and tasty and he devoured every scrap. At one point he grunted at me ‘Can’t talk. Eating.’ So make of that what you will! 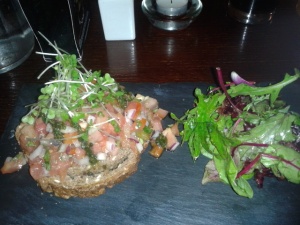 We took a breather before the next course which was just a feast for the eyes when it was presented. ON A PLATE! Yippeee!!

Melting, tender pork belly layered with smoky black pudding, with a crispy fluffy potato rosti, buttered crisp gorgeously green asparagus with spinach, a curl of pork crackling, and a little jug of gravy that I could have drunk by the bucket. It was gorgeous, no other word for it, both of us literally licked our plates. The crowd of Americans at the next table weren’t overly impressed with our table manners, but honestly, if you could have tasted that gravy you’d understand.

The dessert menu then arrived on another blackboard, but we were prepared for it this time and tried to be a bit cooler about it. I went for the lime cheesecake while Yer Man decided on the brownie.

The slates were back for dessert (seriously slates belong on the roof of a restaurant, not on the tables) but the desserts made up for it. My cheesecake was tart and creamy and you could really taste the lime while his brownie was an occasion of sin. Moist, warm, deeply chocolatey, it was superb. 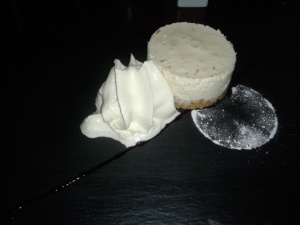 Service was friendly and efficient, if a bit haphazard. One waiter seated us and gave us menus, another took our order, another brought the food, another asked us were we enjoying our meal and yet another brought the bill. But sure, we got our food and were looked after so that’s really all that matters.

Overall, we were really impressed by The Pigs Tale and, apart from the slates, couldn’t fault it. Simple, good Irish food, locally sourced and produced, cooked beautifully, bursting with flavour, what more could you want?

And at just over €50 for three courses each, you really can’t beat that value. We’ll absolutely be back. And you should go too. Even if you’re not in the area, make the trip, it’ll be worth it.

Check out more details about The Pigs Tale including location, menus and pricing on http://www.thepigstale.ie

Note: Yes, I am aware of the irony of me slagging the restaurant for using adjectives in their menu when this review is littered with them. Shut up! You’re not my real Mum!