No home. No haven. No place to call their own – Focus Ireland campaign Blog March 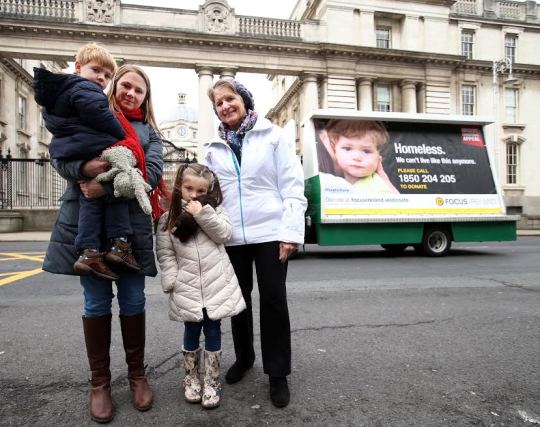 Sister Stan pictured with Rachel Price from Focus Ireland and her two children Aaron and Meabh Compton at the launch of the Focus Ireland urgent Christmas appeal
Pic. Robbie Reynolds

I REMEMBER the first time I saw a homeless person as a child. It was in the city centre of Dublin, on O’Connell Bridge and he was sitting on some cardboard, with a cup in his hand, asking for money.

I was about ten years old I think and I remember my Mam dropping a few coins into his cup from her pocket and telling me that we were so lucky to have a home and not to have to live on the streets like this poor man.

She was right of course but for a long time I equated homelessness with this cold man on the bridge, thinking that all homeless people were like him. That you had to be sleeping rough on the streets to be considered homeless

I know now however that this, of course, is not the case. The reality is homelessness is multifaceted, encompassing everyone from rough sleepers to those sleeping on a friend’s couch to those living in B&Bs. You can be homeless even when you have a roof over your head or a bed to sleep in.

And for 1,200 families this Christmas – including 2,400 children – that’s the reality they face every day. Squeezed into hotel rooms or hostels with very little space, no cooking facilities, no room for toys, no privacy.

No home. No haven. No place to call their own.

Yet as Ireland’s homeless crisis deepens, more and more people, families and children are forced into this situation – something Focus Ireland is hoping to tackle.

And for that they need your help.

Focus Ireland recently launched its Christmas appeal highlighting the record number of homeless people now living nationwide – both rough sleepers and those in emergency accommodation. Far from eradicating homelessness, the problem gets worse every day.

Launching the campaign Sr Stan spoke passionately of the terrible impact being homeless has on families and in particular children. She said: “Christmas should be one of the happiest times of year for children and their families. However, it breaks my heart to think that up to 2,500 children will be homeless on Christmas day this year.

“I know from meeting families who are homeless that we support it’s the children who feel it the worst. Many times a family who are homeless are often squeezed into one hotel room – 3 or 4 people in one room, nowhere to cook or for children to play. There are also many single people and couples homeless and they all need a place to call home.”

Sr Stan highlighted the vital role Focus Ireland has played in supporting families to secure a home, in partnership with the Dublin Region Homeless Executive and local authorities, this year, saying however that more funding is urgently needed. She urged people to give as much as they could afford to help the organisation continue its vital work.

One Mam, Gillian, who was homeless but has now secured a home with the support of Focus Ireland said: “When you have a home you don’t realise how lucky you are… my daughter was only two weeks old when we became homeless,  I don’t think I’d even be here now if it wasn’t for Focus Ireland. I wake up every day now and  think ‘I have a home’.”

Focus Ireland depends on your donations to keep supporting homeless people and families year round. In 2016 alone the organisation supported 12,500 people who were homeless or at risk and they need your help to continue that work.

Turning the key in the door of your own home shouldn’t be a privilege, it should be a basic right, for all our citizens. For all our children. Please, if you can, dig deep and donate to Focus Ireland. You can do so here or by calling 1850 204 205

**This post is part of a Blog March by members of the Irish Parenting Bloggers network, to raise awareness of homelessness and Focus Ireland’s campaign. You can read more posts on the subject by following the hashtag #FocusOnChristmas on social media. Thank you. **