I HAVE a few minutes spare to write this post as I’m waiting for the washing machine to finish.

We’re going on holidays this month you see and that means acres of washing.

Sometimes the preparations for a holiday can start to feel like more trouble than it’s worth, can’t it? Of course holidays are lovely and we’re so lucky to have the chance to get away but, particularly when there are kids involved, it’s a lot of work.

A fellow Mam pointed me in the direction of this great article on the Huffington Post which declared that once you have kids, particularly in the early years, holidays cease to be holidays and become ‘trips’. And if you’re a stay at home parent, a business trip. And I wholeheartedly agree.

You know the way when you work in a company that sends you off on business trips and people say that you’re so lucky to get to see the world and you smile and nod but the reality is that you mainly get to see the airport and the inside of a hotel conference room?

You get to spend several awkward hours with Keith from Accounts – or worse, your boss – you eat copious amounts of limp BLTs and chips because that’s all that’s on the menu and you spend most of the trip in a security line at Heathrow wishing, frankly, that you were dead.

You wash and iron and pack and tidy and clean and make sure you have everything that you need, only to set off to your destination and do EXACTLY THE SAME THINGS ALL OVER AGAIN when you get there.

Kids still need to eat on holidays, they still need their toys, they still need naps and nappy changes or to pee 67 times a day. They still cry and wail and get bored and puke and won’t sleep. The only difference is you’re in a hotel room with one tiny overheated bathroom, instead of being in your own home.

Or – as in our case – you go self catering which is BRILLIANT in a lot of ways as you’re not reliant on hotel menus so can be flexible with meal times and dishes, but can be drudgery in other ways as you do the same amount of cooking and washing up as you would at home. Only you’re expected to smile about it because you’re on holidays.

I don’t know if it’s JUST because I’m a moany oul bitch (ah, I am, it’s grand, I know you all hate me) but even the activities that we tend to do on our holidays aren’t filling me with joy mainly because I do a lot of them at home with The Beast all the time anyway. 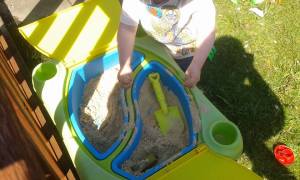 Take for example, the playground. Near to where we’re going is a fabulous playground, in the grounds of a hotel, that has a kind of a pirate ship set up with a twirly whirly  slide that The Beast is mad about. You have your lunch and then can run out to play in the pirate ship, which is great.

Yer Man is all excited about this, keeps clapping his hands and saying he can’t wait to play with The Beast out on the pirate ship and won’t it be great, to be in a playground at 2pm instead of stuck at work. And that’s true, of course.

But for me, I go to the playground twice a week at home. Seen one slide, seem ’em all.

I don’t know why it’s hitting me harder this year, or why the whole holiday thing seems more like a drudge, it’s not like I didn’t know what I was getting myself in for. I knew when we decided that I would be the one to stay at home that it would be a)an enormous privilege and b)a lot of hard work, but for some reason I’m having a harder time accepting it this year.

In truth, it’s an awful way to feel about something as nice as a break away, when there are plenty of people who would love any sort of holiday and when there’s so much bad news in the world, so I’m trying to change my mindset on it.

I’ve decided to accept and acknowledge that my feelings on this are valid, because they are. Holidays do change when you become a parent. And they change further, I think, when you’re a stay at home parent. You do lose some of the fun, some of the excitement, it’s less of a break than when you were 20 and going on a sun holiday with your mates. And it’s ok to feel sad or frustrated at that.

However, like anything at all, a holiday, no matter what sort of holiday, is what you make it.

Fellow blogger Bumbles of Rice told me that what she does in the run up to her family holiday is get her little people all excited about what they’re going to do on their holiday and then in turn, she gets pulled into their infectious excitement. For example she’ll remind them that on holiday it’s the law to eat ice-cream EVERY DAY prompting squeals of delight. So I’ve decided to take a leaf out of her book and do the same thing here.

Mainly, I think, we’re going to switch off and give our poor tired brains a bit of a rest.

And eat ice-cream. Every day. Fuck it, we’re on holidays.