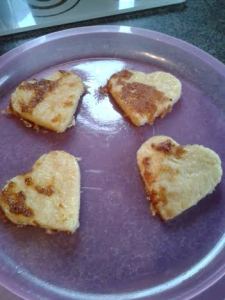 Eggy bread. The one thing he WILL eat!

YESTERDAY I brought a whole shitstorm down on my own head.

I was accused of being a bad mother, told that I was disgusting, that it was a shame I had a child that I obviously didn’t want, when so many others would love a child.

I was told that I obviously needed psychological help. And so on.

I posted jokingly in a group of mothers about how I had spent all day making turkey and chickpea patties for The Beast’s dinner and he wouldn’t even touch them. In the resolutely tongue in cheek post I referred to the baby as ‘fuck face’.

It was a post borne out of frustration and tiredness, meant to be jokey, meant to appeal to other mothers who might have experienced the same thing.

To be clear, I don’t call my son fuck face to his face. Nor do I refer to him as such in real life. It was this one post, in a private group of other mothers who I thought might understand.

The response was swift and vicious. I was vilified as an absolute monster. One woman even suggested that it was a child safety issue and that my son was in danger by living with me.

I really didn’t expect such a response. I know others don’t use bad language with the same impunity that I do and I appreciate that. I do.

But I really didn’t see the big deal, it was so very obviously a jokey not-to-be-taken-seriously post. A mother gritting her teeth in solidarity with other mothers. Or so I thought.

The Admins of the group deleted the post and the comments and removed some members as things got increasingly vicious; I left the group myself. I feel quite sick about it actually. It was a group I really enjoyed being in and had contributed to regularly, I was even an Admin myself, taking on responsibility for running the group. But I couldn’t stay after that.

I realise I’m probably opening myself up to more abuse by writing this, but so be it. I use bad language, I’m sometimes vulgar, it’s how I am.