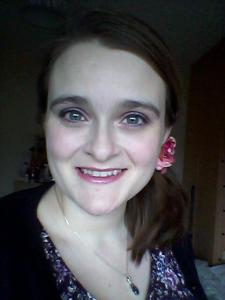 A BUMPER Keeping Up With The Selfridges post today as I didn’t blog yesterday so have two days of ‘looks’ to show you. 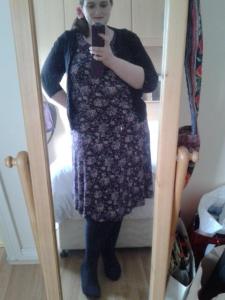 Absolutely NOT the same dress as Friday. This one has a purple background. 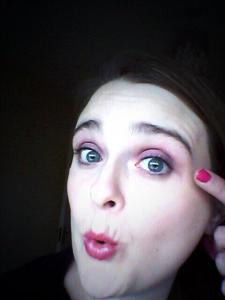 Ooooh purple! Get me!

On Friday I even tried some colourdey eye-shadow (purple) instead of my usual nude/gold colours and really liked it so I’ll deffo try that again. Had a bit of a blusher disaster on Saturday and looked a bit like a Victorian with consumption but you live and learn. *coughs* 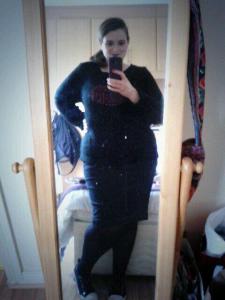 Saturday’s look was more casual, though still with a face full of slap, and I even wore my ‘young people’s’ converse runner yokes which make me feel like I’m 21 again, even though they make me look like a dick.

Overdid the blusher. It looks small but that spot on my chin is EXCRUCIATINGLY painful.

Am so delighted with how people are embracing this challenge – I’ve had messages from people who have bought new clothes because my posts encouraged them to treat themselves, people have got their hair done for the first time in months, used nail varnish for the first time in years and have just generally been good to themselves. It’d warm the cockles of the cauldest heart.

Join in with this challenge on Twitter by tweeting me @beatingblog or using the hashtag #keepingupwiththeselfridges.