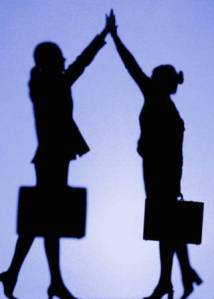 Me and Mam ready for our meeting with the doc!

I WORE a suit. And I bullied my mother into wearing one too.

I don’t know why, but I figured if it was going to be bad news it wouldn’t hurt to look smart. To look confident. To look like the type of people the doctor could take seriously.

My mother was waiting in the lobby of the hospital when I went in, done up like a dog’s dinner at 10am, wearing her ‘good’ jewellery and hair spray. We looked like a pair of businesswomen about to pitch a new computer system to the hospital, instead of a terrified mother and daughter about to get a diagnosis. Praying it wouldn’t be bad news.

It was bad news.

“You have a narrowing in your small bowel, consistent with Crohn’s Disease.” The doctor was matter-of-fact.

Perversely, after worrying that it would be bad news,  I felt relieved. Shocked and sick and distraught at first, but when that wore off, I was relieved.

It was May 2002 and I had been ill for a soul-destroying nine months. I didn’t think I could take another minute of the pain and the sickness so when it came to it, a diagnosis, any diagnosis, was welcome.

I looked over at my mother – she was staring straight at the doctor, a handkerchief shredded between her fingers and I could see her almost physically pulling herself together.

“Right. So what’s next? What treatment is there, what drugs can you give her? We need something, today, before she leaves.”

It’s true what they say, never get between a mother and her cub. She was like a tigress that day.

I think the doctor was surprised that we were taking it so well, that we knew what questions to ask, but this wasn’t our family’s first brush with Crohn’s. My eldest sister had been diagnosed a decade earlier and now history was repeating itself.

Crohn’s is a chronic, life-long, auto-immune disorder of the digestive tract. It can affect anywhere from the mouth to the anus but generally affects the small and large bowel. Symptoms include chronic constant diarrhea, vomiting, abdominal pain, fever and weightloss and a whole host of other problems.

It generally affects young adults and at 23 I was the perfect age for it.

We left the hospital with anti-inflammatories, steroids and painkillers, with appointments for bloodtests and follow-up meetings with the consultant.

My memories of the next few days are a blur. I know I told friends and family the news. I know I was upset, yet glad to have a diagnosis and incredibly relieved that the steroids had started to work. But I don’t think I had really taken on board what that diagnosis meant, that didn’t sink in for a long time.

That diagnosis was ten years ago today. It has been a long ten years.

That sounds terribly maudlin and self-indulgent but it’s the reality. It hasn’t all been bad, of course, I am lucky to be blessed with a lovely life, but the Crohn’s part of it hasn’t always been easy. It is still not easy.

After the steroids, I got a lot better for a time, my symptoms abated quickly but Crohn’s is an unpredictable beast and in 2005 it flared up again and I had to have major surgery – a right hemi-colectomy.

A good couple of foot of my small bowel and the right side of my large bowel were cut out leaving me with a zipper scar from mid-abdomen to groin. It put paid to my future career as a bikini model (ha!) but it was necessary.

Those weeks and months before surgery were dark days. Long days. Hanging-on-by-my-fingertips days. The pain was crushing and unrelenting, I stopped eating, stopped going out, stopped living. I dragged myself to work everyday and slept around the clock when I was at home.

So the surgery was a lifesaver. It has left me with only a small portion of bowel and chances are by time I reach middle age I’ll have to have a colostomy bag, but it was a choice between a life with a bag or no life at all.

Looking back on the past ten years the memories come thick and fast – a horror trip to Strazburg in the grip of Crohn’s, truly believing I would die in an anonymous hotel room; struggling through my sister’s wedding day; having to get off the bus miles before my stop because someone was eating and I couldn’t stand the smell of food.

People asking me, concerned, was I on a crash diet because I had lost so much weight; other people wanting to know the ‘secret’ to my amazing weightloss; the constant need to know that there would be a toilet wherever I was going; dreading bus and train journeys with no toilets; throwing up constantly; crying constantly; trying to hide it, constantly.

Better memories then – remission; stretches of months at a time where I’d be symptom free, able to eat and drink freely, relax, feel better; my wedding day which was wonderfully, blissfully, Crohn’s free; blood tests which showed no sign of a flare; new drugs which gave hope; the realisation that Crohn’s isn’t a death sentence, that it can be controlled.

What I miss most about my life before Crohn’s however is spontaneity. Crohn’s has robbed me of that. I go nowhere without preparation. 24-hours of eating lightly before a long journey, a full box of Immodium, an itinerary so I know where there’ll be a loo, time to prepare myself mentally for being out of the house.

I can never simply get in the car and go off for the day, it’s too stressful. Crohn’s is too unpredictable, I need time to prepare. I don’t sleep the night before plane journeys, worrying that we’ll be stuck on the tarmac and I’ll need the loo and won’t be allowed to. I spend the first 24-hours in any foreign city scouting out clean, accessible public toilets, or calculating the distance between our hotel room and the tourist attractions.

If I do decide to throw caution to the winds and simply go for a night out with no preparation, invariably I have to come home early, leave a meal half-eaten in a restaurant, cancel plans at the last minute, it rarely works out.

I used to work as a journalist and after surgery went freelance so that I could work from home. In the past couple of years I’ve changed career and am now a childminder, working from home. I can’t see myself ever working in an office or outside of my home again. Having to use a communal loo, be restricted as to when I can use the bathroom, have no control over my schedule, it would be too much.

Luckily, I have a wonderful family and fantastic friends who understand. They know what my life is like now and they adapt to that. They accept last minute changes of plan, my pathological obsession with public toilets, sudden illness, my aversion to spicy foods; they turn a blind eye when I bolt from the table mid-conversation.

They have been wonderful and their understanding has made all the difference.

Today has been a funny day. Remembering. Marvelling that ten years has passed so quickly and then in the same thought, looking at the next 40 or 50 years of my life and wondering if I’m going to be strong enough to endure it.

I hope so. Keep your fingers crossed for me, eh?

May is World IBD (Inflammatory Bowel Disease) Month so for more information on Crohn’s or Ulcerative Colitis visit http://www.iscc.ie