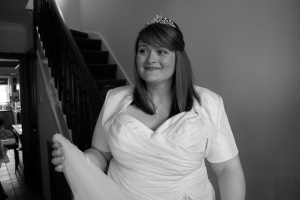 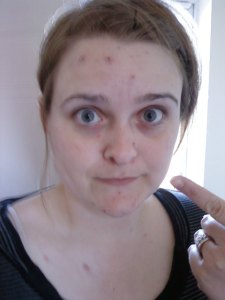 And the unfortunate 'after' picture...

WE were ten days married when Yer Man was relegated to the spare room.

That’s what marriage does folks, happy for years and years and then one very expensive day and an ivory dress later, boom, someone’s in the spare room.

“We’re like Marilyn Manson and Dita von Teese,” I yelled out across the landing.

“I said, we’re like Marilyn MANSON and Dita von TEESE,” I screamed, a little more impatiently this time.

“How is that now?” he asked, coming to the door of the bedroom in his kaks, bleary eyed.

“You know, Marilyn Manson and Dita von Teese. They went out together quite happily for eight years, then got married and were divorced within the year, remember?”

“Oh yeah,” he yawned hugely “but you can hardly compare the two. We’re not getting divorced Karen, you just have the chicken pox.”

He was right, of course, I did just have the chicken pox, but that’s not nearly as glamorous as emulating the Spawn of Satan and his missus and being divorced within days.

The few spots that had appeared on my face and chest during our last 48 hours on honeymoon turned out to be full blown chicken pox, much to my embarrassment.

What 32-year-old grown MARRIED woman gets the bloody chicken pox? On honeymoon, of all times to get them?

I slunk into the doctor’s surgery immediately after touching down at Dublin Airport, scarleh for myself, finding it hard to believe that rather than returning home from honeymoon glowing and laden down with Infant of Prague tat, I was returning covered in pus-filled spots and laden with a raging fever.

“Jaysus,” the doctor said, taking a step back when I walked into his office “what happened to you? The last time I saw you, well…”

The last time he’d seen me had been ten days earlier, at my wedding. It was a real before and after moment for him, let me tell you.

Anyway, he gathered himself and diagnosed the pox, sending me on my way with an antihistamine and instructions to get calamine lotion and some bread soda to try to control the itch.

By that night, the spots had spread further and I was covered in them – they were itchy and tender and vast amounts of calamine lotion and sudocrem was the only thing that gave any relief.

I could only sleep in the starfish position so that no inch of flesh touched another inch, hence why Yer Man had to move out so that I could have more room in the bed and be more comfortable.

If truth be told, I think he was relieved – having to sleep beside a sweating, red-faced, pock covered monstrosity was probably not his idea of a honeymoon.

The week wore on, with me lounging on the sofa, popping antihistamines, trying desperately not to scratch and watching more episodes of the Gilmore Girls than is healthy.

After a few days I felt better and thought it was about time Yer Man was welcomed back into the fold and into the bed.

Until we noticed the scabs.

Turns out when chicken pox is on the way out, the spots scab over and turn into horrible crusty black tipped yokes which FALL OFF all over the house, your clothes, your bed. You get the picture.

“It’s not so bad,” I lied, sweeping a hape of scabs onto the floor, out of sight “come on, come back into the bed with me, it’s nice here.”

I nodded encouragingly at Yer Man, causing another shower of scabs to fall off my face, begging him, pleading with my scabby eyes for him to return to the marital bed.

“I don’t think so,” he said looking terrified and slipping on a pile of scabs as he backed out of the room “Just call me Marilyn, I think I’ll take that divorce after all.”